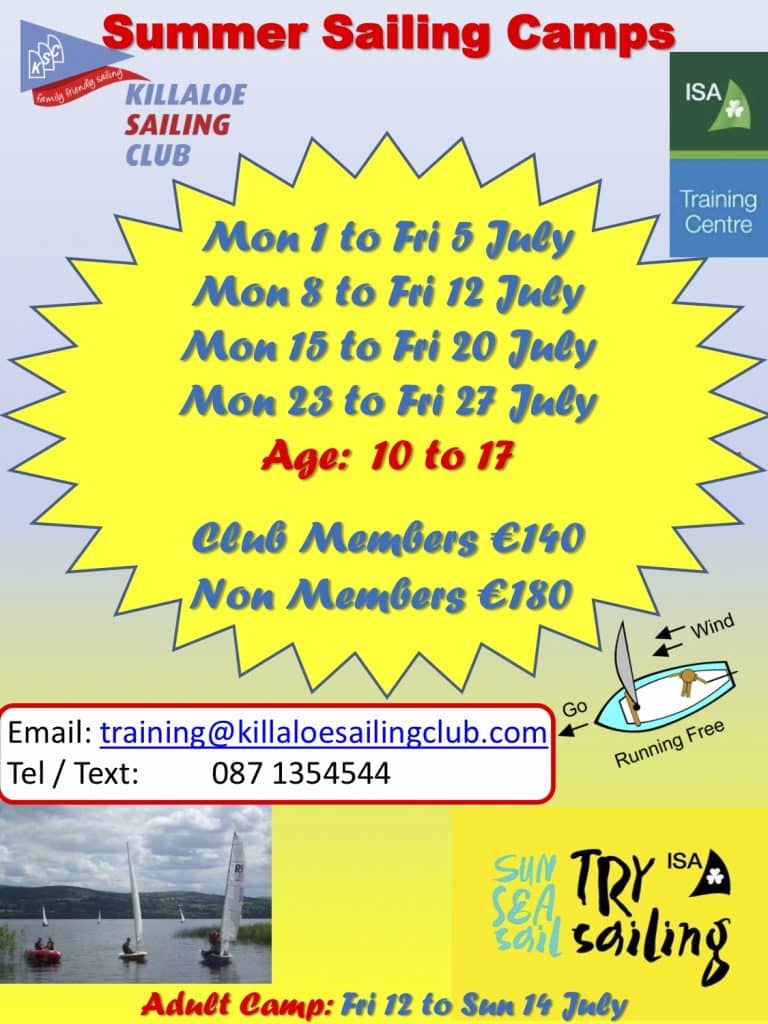 Download a copy of the KSC Junior Camp Booking Form 2019

Here are the final results of the Fundraising Table Quiz, in aid of the Cardiac Unit of Crumlin Children’s Hospital, which was held on 6th March 2015:

The 2014 summer season was rounded off in good style with a long weekend cruise off West Cork. Con’s fleet of Baveria’s saw two crews from Cullaun and a KSC crew, consisting of Cillian, Joe, Derek, Jonathan, Stefany and Liz set sail in a truly ship-shape fashion. The first evening was spent getting to know both boat (we had 50′ of luxury to become acquainted with) and other sailors before readying for departure on Friday morning. Light winds following a brief thunderstorm kept us under motor for the morning, but we still enjoyed the spectacular coastline to Crookhaven, which made a good lunch stop. Following man-overboard manoeuvres under-steam we practiced navigation using transects to gain entry into a lovely cove / harbour, which for various reasons must remain nameless! The wind picked up for the return journey and night navigation skills were tested during the trip to our mooring on Sherkin Island where we rejoined the Cullaun boats.

Saturday morning dawned fair, but reasonably calm. There was sufficient wind to make the voyage to Fastnet, which was viewed from all angles and was suitably impressive. There then followed an impromptu man-overboard situation to attempt to rescue Cillian’s hat – although unsuccessful it gave us all the opportunity to practice the previous days drills under-sail – it was remarked that the shadow of Fastnet lighthouse is not the usual location for such training exercises! After lunch we joined the other two boats as we pulled into Barleycove, where the golden sand and clear blue water could have convinced you of a more tropical location – supported by the sight of the whole KSC crew diving, swimming and snorkelling around the boat. We then broke ranks from the Cullaun boats and had a great sail around Mizen Head and up into Bantry Bay. We were joined along the way by schools of common dolphins enjoying the bow wave, including a couple of young ones. The odd seal popped up near the coast and we saw gannets, cormorants and numerous other sea birds along the way. Con was also able to provide stories of the islands and islanders we passed along the way; tales of the man employed to massage beef cattle, disused castles, islands for sale and much more livened up the trip.

Saturday evening was spent at a new pontoon behind Bere Island, and just east of Colin Farrell’s residence, feasting on home-made curry and planning our pitch to the Dragon’s Den for a boat mounted dishwasher (patent pending!) . We awoke to a perfect morning (for everything except sailing that is); the sun was shining, the water rippled gently, broken by a the head of local seal who was breakfasting on the mussel beds, and Liz who went for an early morning swim. We were the only boat in sight and thoroughly enjoyed the peace and calm of the setting. The tranquillity continued as we motored back out of Bantry Bay. Under normal circumstances this lack of sail power may have been frustrating, but it gave the perfect opportunity for a spot of whale watching; not 10 minutes after Con had finished filling us in on the tricks of the whale watching boats to convince gullible passengers they had ‘a sighting’, he called out ‘over there, a whale’, and sure enough there was a whale, which was later identified as a minky. Another hour or more passed as we floated to the north of Mizen Head watching at least two whales surface between feeds. The perfect day was finished off as the wind picked up, allowing us to sail back towards Baltimore. One final swim was had in the beautiful cove of East Skeen, whilst the intrepid explorers of Stefany and Cillian headed to ‘Cillian’s Arch’, so named for the dare-devil base jumper who conquered its height, although the return journey to the boat through brambles sounded even more of an adventure! A final fry eaten on the deck rounded off the adventures. It was a day no-one wanted to end, and as a result finished with another stretch of night navigation back into Baltimore Harbour.

There was just time to sign up for next year’s trip before heading for home to reflect on the experiences of the weekend.

While the lovely weather has made the days feel warm, the high pressure has meant a third night of light, and frustrating, winds for our September Series. This was the last night where we will try to squeeze in two races before it is dark on the water. There will be just one race each night for the concluding two nights. END_OF_DOCUMENT_TOKEN_TO_BE_REPLACED

More light winds that backed nearly 90 degrees between the start of race 1 and race 2 on Tuesday. Full credit to John Bolger on OOD duty and Sergei Belochkapine on safety duty for some very efficient course adjustment as the sun dipped below the hills. END_OF_DOCUMENT_TOKEN_TO_BE_REPLACED

How To Join Killaloe Sailing Club